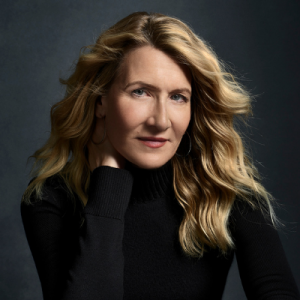 Laura Dern is a three-time Academy Award nominee who won a Best Supporting Actress Oscar for Noah Baumbach’s Marriage Story in 2020. She is also an Emmy and Golden Globe® winner who has touched audiences and critics alike with her moving and heartfelt performances. In addition to her Oscar nominations, Dern has won five Golden Globe Awards on eight nominations and received eight Primetime Emmy Award nominations and one win. In 2019, she was seen in Greta Gerwig’s adaptation of “Little Women,” as well as reprised her role as Renata in the second season of HBO’s “Big Little Lies,” which earned Dern her eighth Emmy nomination.

Upcoming, Dern will star opposite Hugh Jackman in “The Son,” writer-director Florian Zeller’s follow-up to the BAFTA winning and Academy Award nominated “The Father.” She is set to reprise her iconic role as Ellie Sattler in Colin Trevorrow’s “Jurassic World: Dominion,” releasing in 2022.

Dern’s television credits include HBO’s “The Tale,” “Enlightened,” “Recount,” “Damaged Care,” “Within These Walls,” “Daddy and Them,” “The Baby Dance” and “Afterburn.” In 1997 Dern was nominated for an Emmy Award and won an American Comedy Award for her guest-starring role in the controversial “puppy episode” of the ABC comedy “Ellen.”

In addition to her extensive film and television acting credits, Dern has been prolific in her producing career.  In 2017, she established Jaywalker Pictures, a Los Angeles-based production company founded with partner Jayme Lemons. Most recently, Jaywalker has produced the feature documentary, “The Way I See It,” for Focus Features and MSNBC Films, directed by Dawn Porter. Jaywalker also served as executive producers on the Academy Award winning animated short film “If Anything Happens I Love You.”

Upcoming, Jaywalker Pictures will produce “The Dolls,” a limited series in which Dern is set to star alongside Issa Rae; an hour-long series based on the book “Mr. and Mrs. American Pie,” developed in partnership with Tate Taylor, who will direct; and a drama for HBO in produced in partnership with Alex Gibney. Prior to forming Jaywalker Pictures, Dern and Lemons served as producers on the critically-acclaimed HBO series, “Enlightened,” in which Dern also starred.

In 2010, in celebration of their family legacy in film and television, Dern, her mother Diane Ladd and father Bruce Dern were awarded with the first-ever “Family Star Ceremony” on the Hollywood Walk of Fame. Out of appreciation and respect for the extraordinary gifts the Dern family has brought to the big and small screen, the Hollywood Entertainment Museum honored Bruce, Diane and Laura with the Hollywood Legacy Award.

In 2016 she was also selected to serve on the Academy of Motion Pictures Arts and Sciences’ Board of Governors.