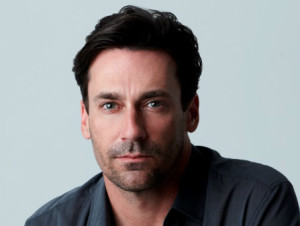 Jon Hamm’s nuanced portrayal of the high-powered, philandering advertising executive Don Draper on AMC’s award-winning drama series “Mad Men” has firmly established him as one of Hollywood’s most talented and versatile actors. He has earned numerous accolades, including a Golden Globe Award in 2008, Television Critics Association Award and a Critics’ Choice Television Award in 2011, as well as multiple Emmy and Screen Actors Guild nominations. “Mad Men” concluded its seventh and final season on May 17, 2015.

Hamm is currently in production filming 20th Century Fox’s KEEPING UP WITH THE JONESES, opposite Zach Galifianakis and Isla Fisher. Directed by Greg Mottola (SUPERBAD), the film follows a suburban couple who become suspicious of their new hot neighbors. Hamm will next be seen on the big screen lending his voice to the upcoming Universal Pictures animated feature, THE MINIONS, alongside Sandra Bullock and Steve Coogan. The film will open July 10, 2015. Hamm’s previous film credits include Disney’s MILLION DOLLAR ARM, based on a script by Thomas McCarthy and directed by Craig Gillespie, FRIENDS WITH KIDS, written and directed by Jennifer Westfeldt; BRIDESMAIDS with Kristen Wiig; Ben Affleck’s THE TOWN, Zack Snyder’s fantasy thriller SUCKER PUNCH, HOWL with James Franco, SHREK FOREVER AFTER, in which he voiced the character ‘Brogan,’ THE DAY THE EARTH STOOD STILL with Keanu Reeves, Jennifer Westfeldt’s IRA & ABBY and KISSING JESSICA STEIN, and WE WERE SOLDIERS

Hamm’s appearances on the Emmy-winning comedy, “30 Rock,” from 2009-2012 earned him three Emmy nominations for Outstanding Guest Actor in a Comedy Series. He has also hosted “Saturday Night Live” three times, once in 2008 and twice in 2010 to critical acclaim. In addition to “Mad Men”, Hamm also appeared this year on Netflix’s “Unbreakable Kimmy Schmidt” created by Tina Fey and Robert Carlock. Hamm plays Reverend Richard Wayne Gary Wayne, the senior prophet who fools four women into being held captive for fifteen years while they believe to have survived the apocalypse. His additional television credits include,  “A Young Doctor’s Notebook,” a BBC miniseries in which he stars opposite Daniel Radcliffe and also executive produced, the Larry David film CLEAR HISTORY for HBO, IFC’s “The Increasingly Poor Decisions of Todd Margaret,” “The Division,” “What About Brian,” “The Unit,” “Numb3rs” and “CSI Miami,” as well as voice work on “Metalocalypse,” “The Simpsons,” “Bob’s Burgers” and more.  Hamm first came to audience’s attention in the NBC series “Providence.”  Signed for a cameo role, he impressed the producers so much that he ended up with an 18-episode run on the series.

A native of St. Louis, Missouri, Hamm received his Bachelor of Arts in English at the University of Missouri-Columbia and currently resides in Los Angeles