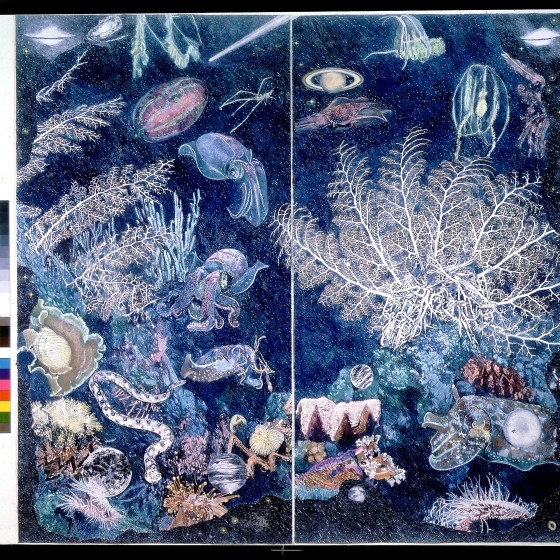 The Night Sea series really began in Berlin in 1977.  In December, the Northern darkness descends, and one is reminded of a time when Medieval man stayed indoors for the month.  I found myself without a sun-filled landscape for the first time.  I spent the days in the Dahlem Museum looking at the dark Rembrandts and Goya’s and was particularly struck by the late Goya etchings of the strange creatures flying through the night. A small stone relief of Jacob’s ladder with men going from the neither world to heaven to the neither world and back also caught my eye.  I thought a lot about the descent of Orpheus, and Christ into the underworld.  I kept imagining myself at the bottom of the Bardo tankas and wandering through the lower infernos of Bosch paintings.

There is a myth call the Night Sea Journey, the most popular being Jonah and the whale.  The hero is swallowed and taken to the bottom of the sea.  He frees himself by lighting a fire and emerges transformed by the experience.  I had a dream in which I was on an island and floating in a black sea in the dark.  Sea turtles and scientists were guiding me through the waters showing me the beauty of the sea at night.  The week I returned to New York from Berlin, I got a grant to go to Australia.  There I did my first night diving, and the Night Sea Series began.

Ann McCoy received her B.F.A. from the University of Colorado in 1969 and an M. A. in sculpture and drawing from the University of California at Los Angeles in 1972. Her first works were wooden sculptures of mountains; later, she made cast resin sculptures of icebergs. In the early 1970s, after she abandoned sculpture for monumentally scaled drawings done in colored pencil, her success came fast. By the mid-1970s she was a nationally acclaimed artist with some solo shows to her credit. In 1974, McCoy first exhibited drawings of underwater explorations, for which she is largely known today. A scuba diver since 1968, McCoy works from photographs of the plant and animal life of the subaquatic world, creating drawings and hand-colored lithographs distinctive for their meticulous detail and surrealistic mood.

Generously donated by an anonymous donor.